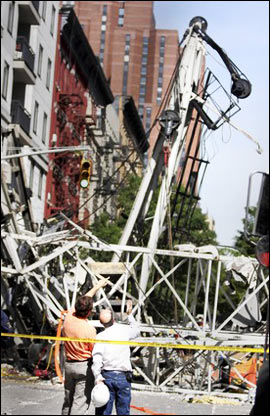 Tom Barth has been involved in crane accident investigation for more than 15 years. He investigated the 2008 Tower Crane collapse in New York City that killed four people.

Tom Barth has investigated crane accidents and provided critical feedback as an expert witness in more than 55 high-profile cases, including two 2008 Tower Crane collapses in New York City that resulted in fatalities and the collapse of one of the country's largest mobile cranes at a Houston oil refinery in July of that same year. With more than 15 years experience in crane accident investigation, Tom Barth's is regarded as one of the country's most respected investigators. He has more than 38 years experience as a crane operator, inspector and instructor that provides the background needed for crane accident reconstruction. His company, Barth Crane Inspections, was accredited by the United States Department of Labor/OSHA under 29 CFR. Part 1919 — from 1998 to 2017. He was one of only 118 companies to hold that accreditation.

Tom's experience as an operator includes tower cranes, crawler cranes, harbor cranes and on offshore platforms. He has operated Manitowoc Crawlers, barge-mounted Clyde cranes, P&H Crawlers, PECO and Liebherr tower cranes, and a variety of truck cranes all over the country, including work in some of the harshest environments. He worked on the Unocal Monopod platform in Cook Inlet, Alaska and on rigs in the Gulf of Alaska where difficult tides, wind and inclement weather are the norm.